Miguel "GORILLA" Lopez is a graphic artist that specializes in character design. Some of his most notable work was designing characters for both the Simpsons & Family Guy. Since then, he has gone to create his own IP that has none other than Disney has tried to poach, however, Miguel has much bigger plans! His vision is to build a metaverse that includes his work, as well as open the door for digital collaboration opportunities for all artists who want to participate.

Miguel has one of the most inspiring stories I've ever heard, the grit, determination, and relentless hustle from this man sends chills down my spine as I type this. Growing up with not a lot of resources, he fought his way to get his and make a living off what he loves. I won't spoil the rest, you'll just have to listen to this 3 HOUR EPISODE.

Brew a pot of coffee, not that you'll need it with Miguel's infectious upbeat energy. 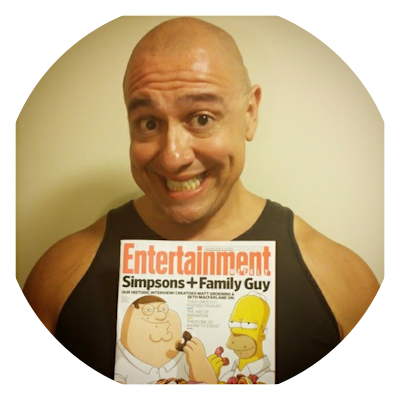 In 1992 Miguel "GORILLA" Lopez started a business called "Huango Wear," an apparel and design company, which has since evolved into "GORILLA Enterprises." In 1998 GORILLA was hired as a character layout artist on "The Simpsons," where he developed and drew key pose animation on a multi-leveled layout show with complex pan sequences. From 1999-2001 he was a character designer for the Fox hit series "Family Guy." In a character heavy show he was responsible for creating all new incidentals, re-occurring, and celebrity caricatures. He also created special poses and costumes, in addition to doing character layouts, props, and backgrounds.

After Family Guy, He acted as the art director on "The Sprout Jar Kids" for the animation division of FM Rocks. GORILLA then started freelancing for various studios where he earned credits on shows such as "Xiaolin Showdown", "Back at the Barnyard", "Barbie Fashionista" and "Monster High". He also began developing his intellectual properties while free-lancing and running his own company.

Currently GORILLA is working on his own intellectual properties "The Adventures of Sporky," "Meowfia," "Mimi & Did-It", and "Felipe the flying Squirrel" to name a few. GORILLA Enterprises specializes in the development of cartoon characters for traditional 2D as well as 3D animation, extensive professional experience in portrait/life drawing, technical illustrations, and the production of camera-ready art work for print and textiles. GORILLA Enterprises also conceptualizes corporate logos, designs for print on clothing, accessories, footwear, and skateboard decks.